When the late spring sun begins to shine stronger, there is the first thought to go to the water. And although the Małopolska region, being far from the sea or lake districts, more than with sunbathing, is associated with mountain hiking, there are surprisingly many options for swimming and doing water sports here. The fresh, crystal clear water of the mountain rivers gives coolness in hot weather and attracts canoeists, artificial water reservoirs on the Dunajec, the Skawa and the Ropa rivers are a remarkable proposition for sailing fans, and numerous sunken pits after sand, gravel and quarries in Kraków and the surrounding area function as popular swimming spots. Not everyone knows what a great adventure it is to explore - in a kayak - the city itself near Wawel!

Undoubtedly, the most famous water attraction of the Małopolska region is rafting down the Dunajec River gorge in the Pieniny Mountains. A beautiful, approximately 18 km long canyon between the steep, limestone peaks of Three Crowns and Sokolica is done with the help of raftsmen on rafts made of interconnected canoes, made of solid spruce trunks. The history of rafting on the Dunajec is over two hundred years old, and its popularization was closely related to the development of Szczawnica - the final rafting stop as a spa town. Today it is one of the symbols of the region.

The Dunajec is the largest mountain river in Poland, which you can get to know from a raft or a canoe. Despite single rapids and small faults, the river is not difficult, and canoeing trips are organized both on the section of the gorge itself and below, in the vicinity of Krościenko on the Dunajec River. Canoeing has been experiencing a real boom in recent years in Poland, and other the Małopolska region rivers, such as the Skawa or the Poprad - tributary of the Dunajec with a particularly charming, winding bed near Muszyna. It is also worth trying this form of visiting Kraków itself, there are several kayak rental shops on the Vistula, including: near the Nadwiślan Sports Club and the Railway Water Club. Wawel looks particularly beautiful from the kayak's perspective, opposite to which in the 1960s there was a popular city beach and the section of the Vistula River from Salwator towards the monastery in Tyniec, which can also be reached by the Kraków Water Tram. At the level of the Camaldolese monastery in Bielany, there is a railway station called the Kolna Mountain Canoeing Track. 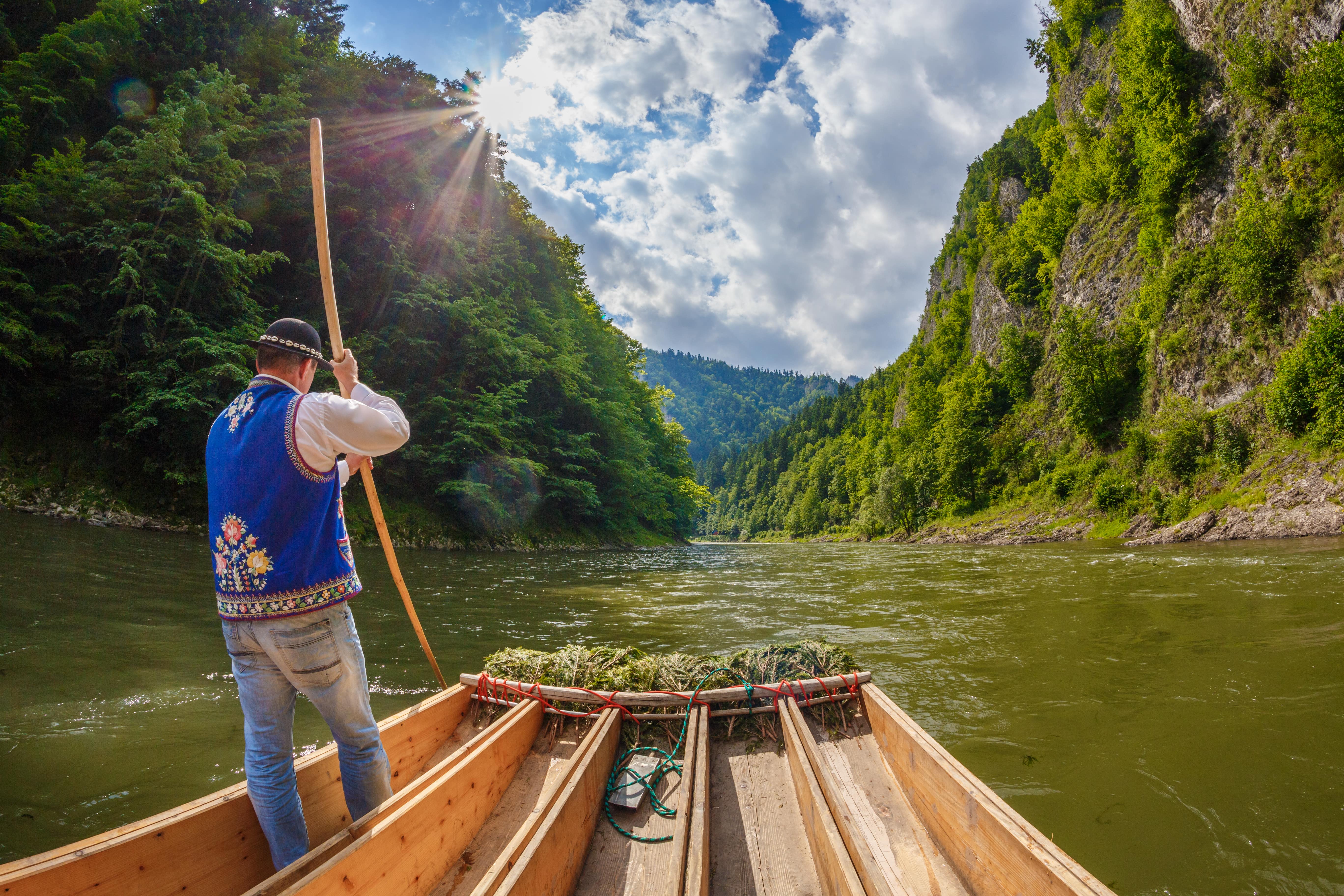 In the Małopolska region there are several artificial, but perfectly integrated into the mountainous landscape retention reservoirs, created mainly for flood control and energy purposes. The largest of them is the Rożnowskie Lake, located on the Dunajec river below Nowy Sącz. This vast water reservoirs is popular with sailors, and on its shores there are many public and life-guarded swimming areas. The largest resort town is Gródek on the Dunajec river which has a public beach. The forested shores of the lake, such as the Patelnia peninsula or the Monkey Island located in its central part, are refuges for wild birds.

In the upper reaches of the Dunajec, already in Podhale in the 1990s. the Czorsztyńskie Lake, so popular among yacht, windsurfing and SUPs lovers was created. Windsurfing and kitesurfing has become even more popular on the small Klimkówka Lake in the Low Beskids, picturesquely situated among the forested peaks of the Gorlice Pieniny. The reservoir played the Dnieper River in the famous film adaptation of Jerzy Hoffman's "Fire and Sword". The newest lake in the Małopolska region is the Mucharskie Lake, the reservoir with an area of approx. 10 km² was created in recent years as a result of the completion of the construction of the dam on the Skawa River in Świnna Poręba, which in the near future will become another important water sports centre.

The entire central part of the Małopolska region is full with artificial lakes which originally housed sand or gravel mines. After mining was stopped and pumps were disconnected, the excavations were naturally filled with groundwater, in many places forming reservoirs with particularly clean water. In this way, three main swimming areas of Kraków were created - the "Na Piaskach" lagoon in Kryspinów along with the smaller but more secluded Budzyński Lagoon, the Bagry Lagoon in the Podgórze district or the complex of Przylasek Rusiecki popular especially among the residents of Nowa Huta. All three bathing areas have life-guarded swimming areas and a constantly developed infrastructure, there you can also try wakeboarding or water skiing on specially prepared tracks. Other similar places in the region are the swimming area in Brzegi near Wieliczka (the Brzegi Harbor) or "Radłowska riviera” In Radłów near Tarnów. 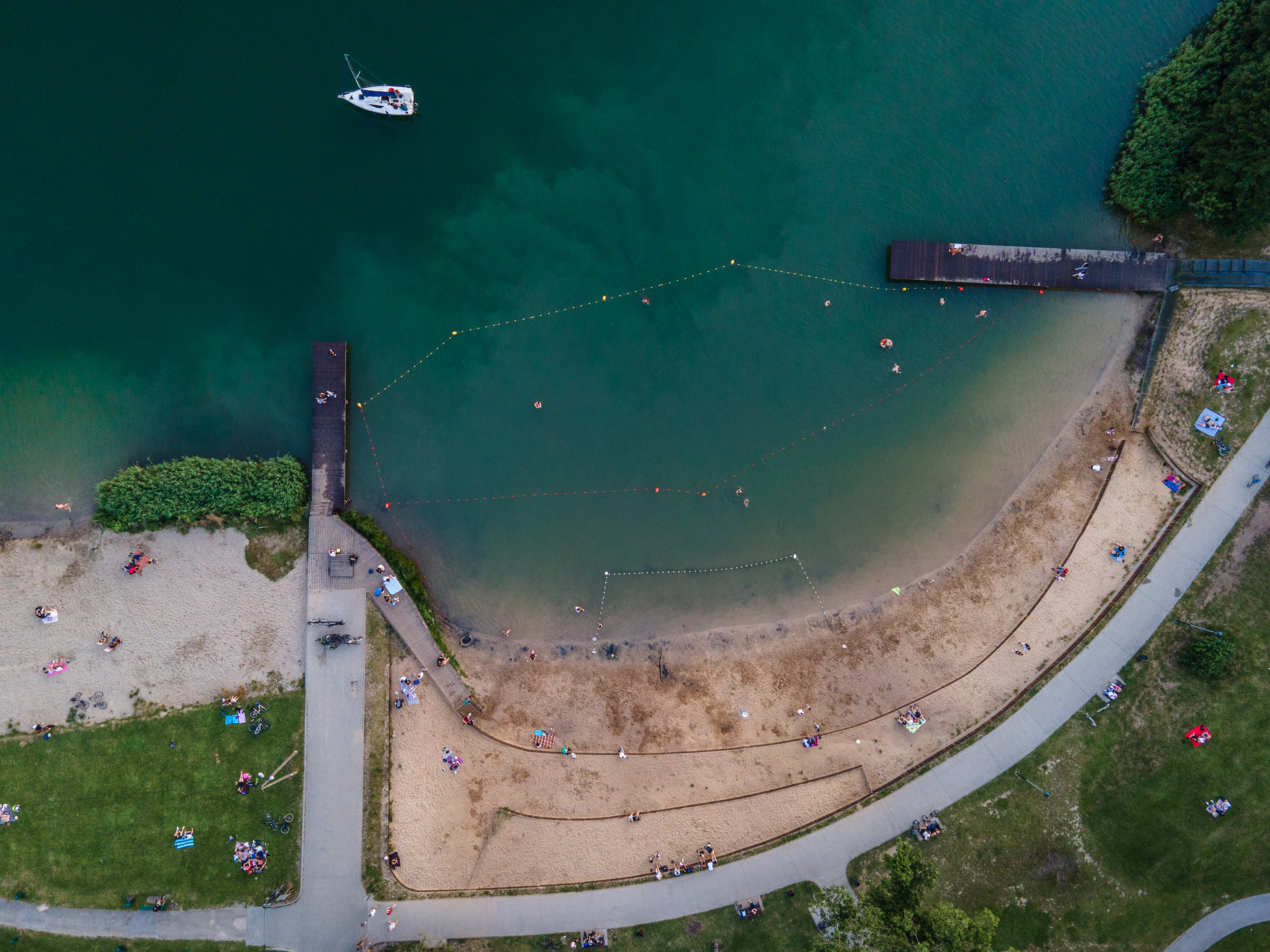 Yet another, exceptionally charming type of artificial lakes are flooded limestone quarries. The rocky surroundings and the clear blue water in such reservoirs create frequent and legitimate associations with the coasts of Croatia. A real gem here is located in the very centre of Kraków - the Zakrzówek lagoon with a maximum depth of 32 meters, which is especially liked by divers. Currently, the area of the lagoon is being transformed into a public park with designated places for swimming. This is how the Balaton Lake in Trzebinia was created, where the official swimming area is located.

As you can see, there are many ways to relax by the water in the Małopolska region. It is very important to know your current skills and adapt your sporting challenges to them, both when it comes to swimming and more physically demanding activities such as wakeboarding and kitesurfing. After all, it's all about pleasure - and refreshment on hot summer days!